My last day in Toronto.  The central focus point of attention today was my memorycard. It bugged me that it didn’t work and I didn’t know whether the card was. Alfunctioning or whether the phone was malfunctioning. I first went shopping. Had a nice time. But was soooo hungry. I  insisted a food court and had a roasted BBQ pork. By the time I paid I already felt sorry I had ordered. I had wanted to eat a t the enormous food plaza where I had diner yesterday.  But I was too hungry to make it there. And the noodles didn’t look good. They were very thick. More like Japanese noodles. The pork looked okay, not great. But when I took a first bite all my feelings as regret disappeared. It was one of the crunchiest BBQ pork I ever had. It certainly made up for the noodles that I didn’t like. 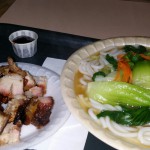 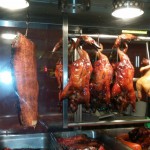 Best Buy
With renewed energy I went to best buy.  Hoping that there would be an it nerd there  that could help me out with the phone.  I was pleasantly surprised. They offer a geek squad that helps you out and does repairs.  So I hopefully waited my turn.

The face!
Unfortunately the young kan that helped me made a face when I told him what the issue was. You know the kind of face that says. I don’t feel like doing this, too complicated, I’d rather do something else.  There was no other option than for me to demonstrate my geekness! I asked him whether I could show him the phone. I saw a strange white thing in the slot and was wondering whether that prevented the memory card from making proper contact with the phone.  He confirmed that I interpretated the face correctly. His response was well I don’t know and we don’t do phone repairs here. Another  geekness demo was definitely required! I asked him whether he had a samsung phone in the store.  And he immediately started making face objections. This phone wasn’t bought in Canada etc. time for some serious interruption. I had to bite my tongue not to ask him whether the stock of the store was related to where my phone was bought. Really…..what does that have to do with anything. But I displayed some teacher qualities and explained to him that if we could have a look at another samsung phone we could find out whether the white thing I saw in the slots was present I. The other phone as well. O,he said. That’s a good point and pulled out his Samsun galaxy note. And what do you know? Same white thing inside the slot. So that wasn’t the cause of the problem. And he was already  looking at me as if we were done since he.had done all he could. But that’s when he got acquainted with my persistence.  I asked him to insert my memorycard into his phone to see whether it would work. If it would there was an issue with the phone. And if it wouldn’t chances would be big that there was only an issue with the card. I think I saw a flickering of admiration for my geekness in his eyes. But it went away so fast that I’m not sure.

Did  I need to buy anew memory card?
He inserted the card in his phone and it didn’t work there too. So there was a problem with the card and probably not with my phone. That was relief, until I saw the prices of a new card……99 Canadian dollar! But there was another option. I could format the card. As it looked I would have lost all the data anyway. So maybe I could save the function of the card by formatting the card.  No luck there. The phone s signal that there was a malfunction with the memory card kept beeping. So I was about to call my geeky husband for advice on what card to buy. Bit pressed on the button to format the card again. And while waiting for him to pick up I noticed that the memory malfunction signal was off and it stayed off! I only lost yesterday’s pictures and my music.
Which only means I have to take some. Ore pictures with Ricardo in Orlando! Bummer!

Going to the airport
I went to a tourist counter to ask for. The cheapest way to get to the airport. And the lady totally surprised me! On internet it says the cheapest way is by the airport express bus that I used when arriving. 21 dollar! But the lady told me I could get to the airport for only 3 dollar! So I did! I took a taxi to the subway station and got to the airport in time and was allowed to cut lines since I’m a silver sky team elite member since August first again. So happy with that.
It the best part came when they called my name while I was sitting at the gate! They upgraded me to business class! So I’m sitting in a comfortable business class chair while writing you this blog! New York New York here I come!